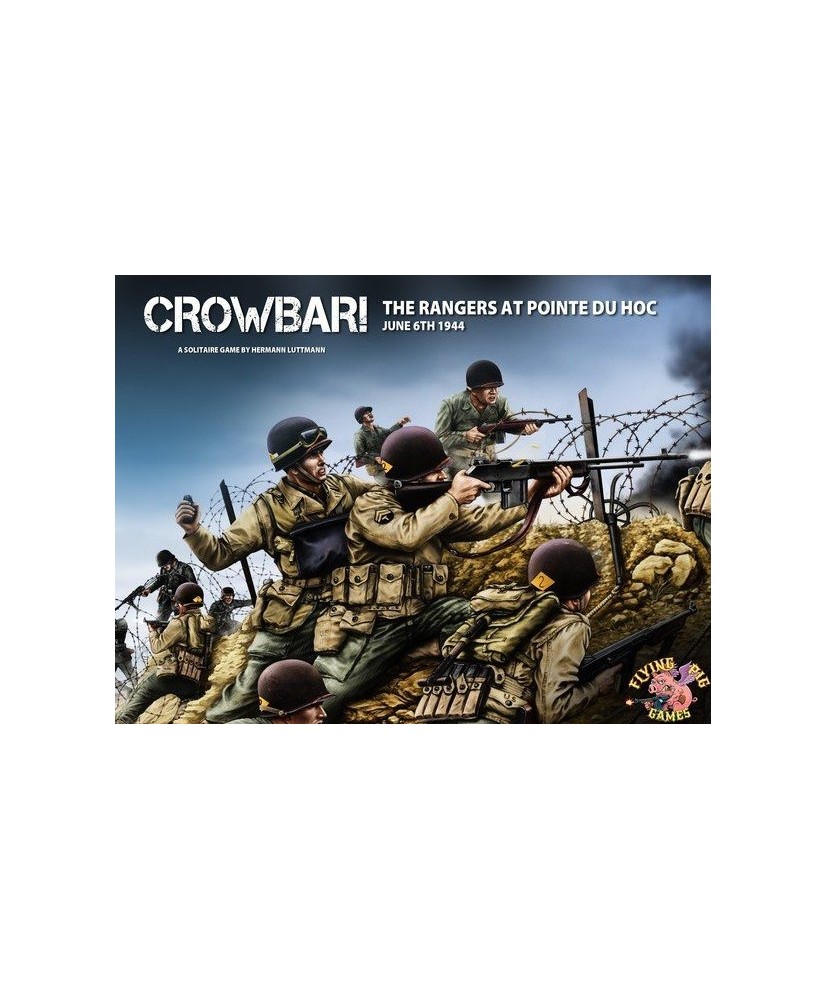 
Ultimele produse in stoc
June 6, 1944 - 7:09 am A commanding voice shouts “Crowbar!” from the carefully monitored radios of Ranger Flotilla headquarters aboard the LSI command ship St. James. With that signal, the 225 men of Dog, Easy and Fox Companies of Force “A” of the 2nd Ranger Battalion launched one of the most incredible and seemingly impossible assaults of military history. Tasked with landing on the beaches of Normandy, France and scaling the towering 100-foot cliffs at Pointe Du Hoc in the face of determined German defenders, the Rangers were the only force that could possibly meet this challenge. Despite initially heading in the wrong direction and landing in jumbled order, the elite Rangers were eager to begin their ascent. Their mission was to find and destroy the six huge 150mm artillery pieces that were deployed in the area. These guns had to be neutralized lest they rain down a massive barrage on the American forces landing at nearby Omaha Beach. And if that wasn’t enough, the Rangers were also ordered to set up roadblocks on the Vierville-Grandcamp highway to delay and harass any Wehrmacht reinforcements from reaching and counterattacking the D-Day landings. The Ranger battalion climbed the massive heights against stiff resistance and advanced inland, suffering severe casualties in the process. They took many of the German positions, but no guns were to be found. The Rangers then fought off vicious counterattacks, launched by the German 726th and 914th Grenadier Regiments, and were nearly pushed back into the sea. But under the inspired leadership of Lt. Col. James Earl Rudder, the Rangers held on and eventually found and destroyed the concealed guns and established the needed roadblocks. Bravery and perseverance won the day for the Rangers as they completed another successful chapter in their glorious history. Crowbar!: The Rangers at Pointe Du Hoc is a solitaire wargame (with two-player and cooperative variants) which abstractly simulates the ebb, flow and risk of the Pointe du Hoc assault, with you playing the attacking Rangers. The game system traces its parentage to the popular "In Magnificent Style" game and mirrors its speed of play, tough decision-making and heart-pounding push-your-luck excitement. But Crowbar! has been updated to allow for an even smoother gameplay experience. For example, instead of the old “dice matrix” system to determine unit movement results, the game now utilizes four custom Movement Dice. Each die is made up of different results, escalating the possible risk/reward ratio. Dice are thrown one at a time and can be read instantly to determine what happens to the unit. The system also challenges you with even more events, including constant German counterattacks, ammunition shortages, artillery bombardments, booby traps and other surprises. Your goal is to meet your various objectives as quickly as possible, before the German defenders can dig in even deeper and before they can organize effective counterattacks. Ultimate success or failure in the game is measured by how well you do as compared to the actual heroic accomplishments of the Rangers on that historic day. Are you up to the challenge?
Flying Pig Games
Joc de baza