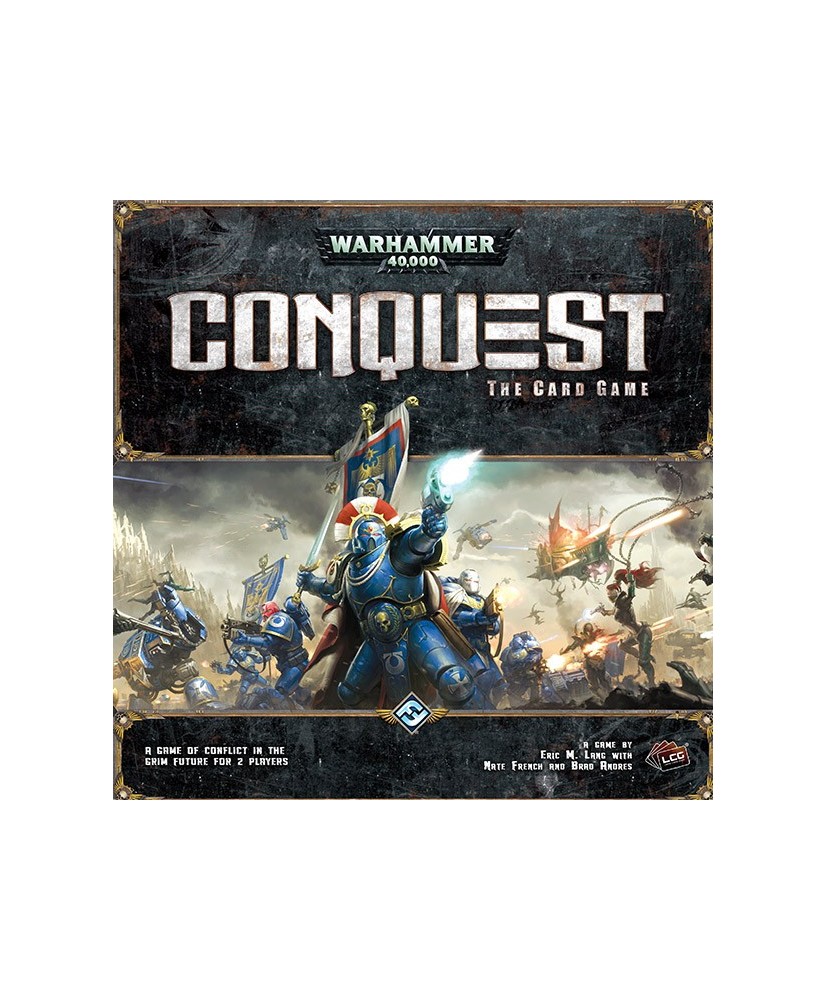 In Warhammer 40,000: Conquest, a two-player Living Card Game, you take the part of a warlord, leading your armies into battle against your opponent in a bid to claim glorious victory. Even as you lead your bravest warriors into battle, you must plan for the future, establishing a presence on planets before the tides of war consume them in blood and fire. You must conquer the Traxis sector by strength of arms for in the grim darkness of the far future, there is only war. Warhammer 40,000: Conquest introduces seven distinct factions: Space Marines, Astra Militarum, Orks, Chaos, Dark Eldar, Eldar, and Tau. Each of these factions possesses a unique flavor and style of play, and an alignment wheel introduces the possibility of forming an alliance between two factions. At the start of play, the Traxis sector lies open before you, with planets awaiting the tramp of armies on the road to war. Each round begins with you and your opponent preparing for battle. Planet cards are arranged in a row between the players at the beginning of the game, and the planet farthest to the left of the starting player is the first planet. Each round, you or your opponent will clash at the first planet, and the victor will capture the first planet. Capturing planets is your ultimate goal. Some planets possess essential materials necessary for the armies of the 41st millennium. Others offer strategic advantages to those who hold them, while yet others are home to great technological wealth. Each of the planet cards possesses one or more symbols in the upper left hand corner, designating that planet's assets. These symbols grant no abilities by themselves, but the first player to collect three planets sharing a common symbol dominates the sector and wins the game. Your warlord grants powerful special abilities, determines your starting resources and hand size, and serves as a vital part of your army, so you'll want to build your deck around your warlord to take full advantage of his strengths — and cover his weaknesses, as defeating the opponent's warlord is another way to victory.