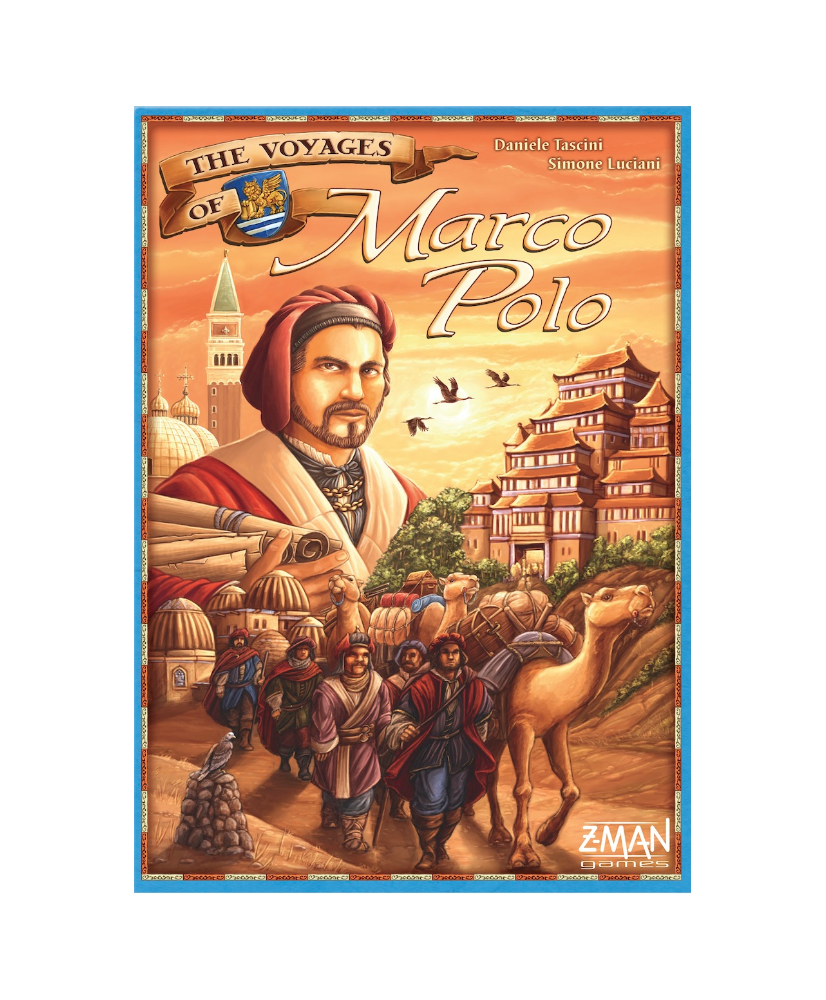 In 1271, 17-year-old Marco Polo started on a journey to China with his father and older brother. After a long and grueling journey that led through Jerusalem and Mesopotamia and over the "Silk Road", they reached the court of Kublai Khan in 1275. In The Voyages of Marco Polo, players recreate this journey, with each player having a different character and special power in the game. The game is played over five rounds. Each round, the players roll their five personal dice and can perform one action each turn with them. The five main actions are shown on the bottom part of the board: Get resources with 1-3 dice, depending on the value of the resource (camels, pepper, silk, gold). The first player for each resource gets them for free; the later ones have to pay according to the value shown on the dice. Take one resource of your choice and two camels. Each player sets the minimum value for the future dice. Earn money, with any one die netting you five money. Purchase orders: The value of one die unlocks the orders up to that number (shown on the spaces) and allows to buy one or two of those orders. Orders are refreshed and placed at the beginning of each round. To fulfill an order, players have to spend resources for victory points, other resources, camels, and more. Travel: Two dice are placed to unlock the distance that can be traveled on the upper part of the board, that is, the map. Here, the traveler piece of each player starts at Venice and can decide between several routes eastward, all the way to Beijing. When a traveler stops at a city, they can place a marker there, giving them access to a different additional action for the rest of the game. After five rounds, the game ends with players receiving victory points for arriving in Beijing, fulfilling the most orders, and having reached the cities on secret city cards that each player gets at the start of the game; these points are added to the VPs gained during the game. Awards & Honors 2015 Deutscher Spiele Preis Best Family/Adult Game Winner 2015 Golden Geek Best Strategy Board Game Nominee 2015 Golden Geek Board Game of the Year Nominee 2015 International Gamers Award - General Strategy: Multi-player Nominee 2015 Kennerspiel des Jahres Recommended 2016 Goblin Magnifico Nominee 2016 Scelto dai Goblin Winner