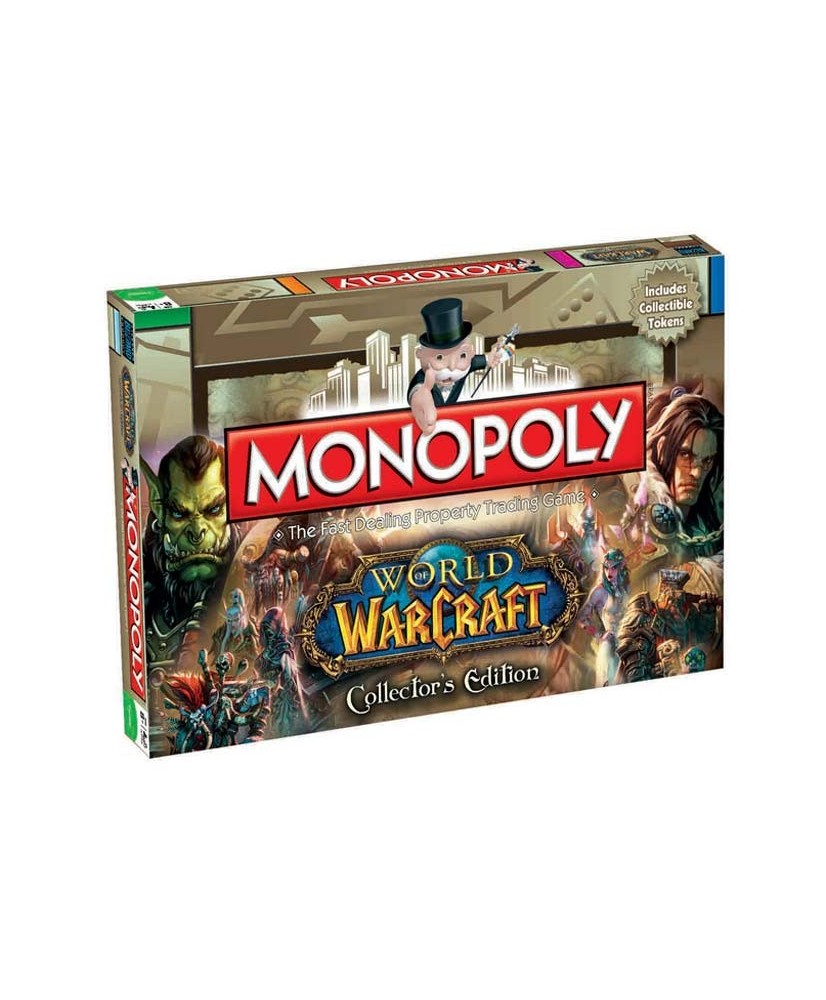 "Time is money, friend." Descend into a realm of myth, magic, and legendary adventure with the World of Warcraft Collector's Edition of Monopoly. Now is your chance to dominate the epic lands of Azeroth and beyond with cunning economic strategies. Buy the ominous Twilight Highlands and feel the presence of the Old Gods in the air. Trade for Scourge-infested Icecrown to gain complete control of the coveted Northrend zones. And for the ultimate power play, seize the mighty faction capitals: Orgrimmar and Stormwind. When you own it all and reign supreme over your opponents, victory will be yours. The goal of the game is to be the player with the most money at the end of the game. On his turn, a player rolls two dice and moves that number of spaces around the board. If the player lands on an as-yet-unowned property, he has the opportunity to buy it and add it to his portfolio or allow the bank to auction it to the highest bidder. If a player owns all the spaces within a color group, he may then build houses and hotels on these spaces, generating even more income from opponents who land there. If he lands on a property owned by another player, he must pay that player rent according to the value of the land and any buildings on it. There are other places on the board which can not be bought, but instead require the player to draw a card and perform the action on the card, pay taxes, collect income, or even go to the battle ground (jail). Fully customized game elements including: Custom Money: $1 Chen (from the new Pandaren race, featured in the soon-to-be released expansion, Mists of Pandaria)), $5 Magni (Dwarf), $10 Vol'Jin (Troll), $20 Tyrande (Night Elf), $50 Sylvanas (Blood Elf), $100 Varian ( Human), $500 Thrall (Orc) Custom Tokens: These top 6 tokens were voted on by fans: Corehound Pup, Murky, Doomhammer, Hearthstone, Mechagnome, Flight Path Boot
USAopoly
Joc de baza