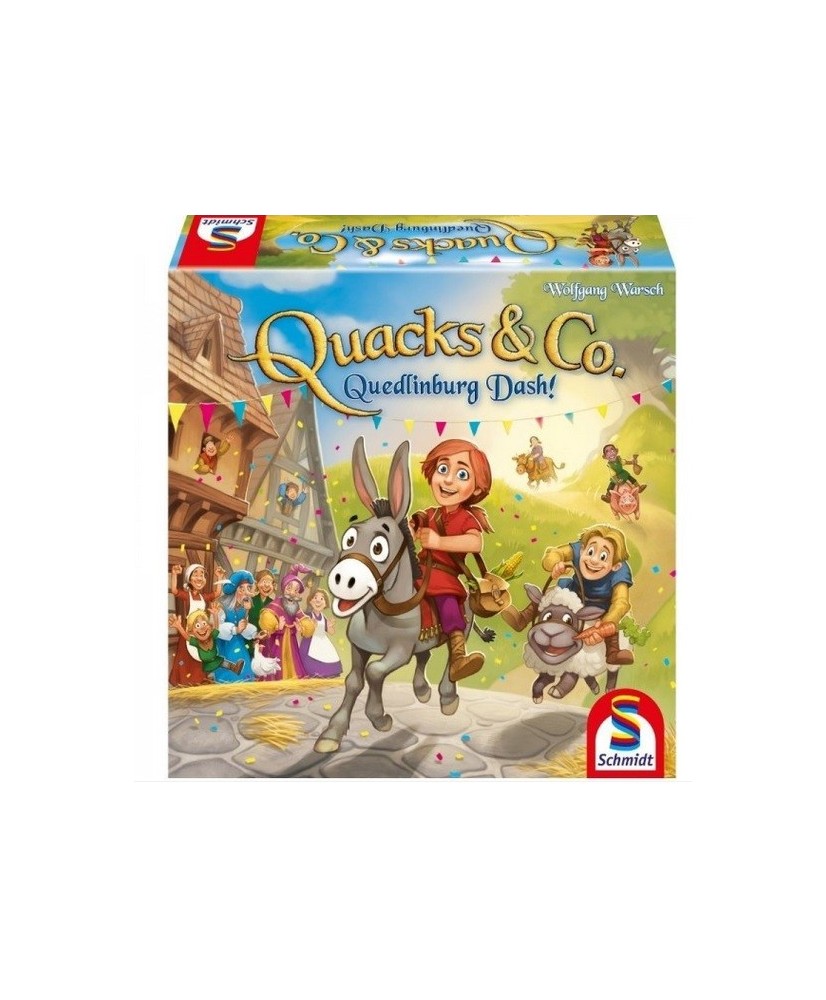 It's race day in Quedlinburg, and with the right combination of food and luck, you will ride your mount to victory and claim the golden cauldron. Mit Quacks & Co. nach Quedlinburg features similar gameplay to The Quacks of Quedlinburg, with each player building their own bag of tokens over the course of play, then drawing those tokens to try to further themselves to victory. Each player starts the game with their mount at the start of the racetrack and a bag that contains four dream tokens, a yellow 1 token, two red 1 tokens, and a red 2 token. On a turn, you draw a token from your bag, then place it on your animal board. If you draw a colored token, place the token on your animal board, advance your animal on the track as many spaces as the number on the token, then carry out the effect of that color: red tokens earn you 1-3 rubies, yellow tokens let you roll a die for a random bonus, green tokens let you take another turn or return a drawn token to your bag, and blue chips let you move extra or upgrade a token. If you draw a dream token, place it on one of the clouds on your animal board. After you draw and place a third dream token, use all the rubies on your board to buy new tokens — no two being the same color, mind you — then place these new tokens and all previously drawn tokens in your bag. Keep taking turns until someone reaches the end of the track and wins! Mit Quacks & Co. nach Quedlinburg includes a double-sided game board for a shorter or longer race; orange and purple tokens that provide new powers, such as advancing as many spaces as the number of rubies you have; and double-sided action boards for each type of colored token, allowing you to play with different sets of actions from game to game. Awards & Honors 2022 UK Games Expo Best Children's Game People's Choice Award Winner 2022 UK Games Expo Best Children's Game Nominee 2022 UK Games Expo Best Children's Game Judges Award Winner 2022 Kinderspiel des Jahres Nominee
CMYK
Joc de baza