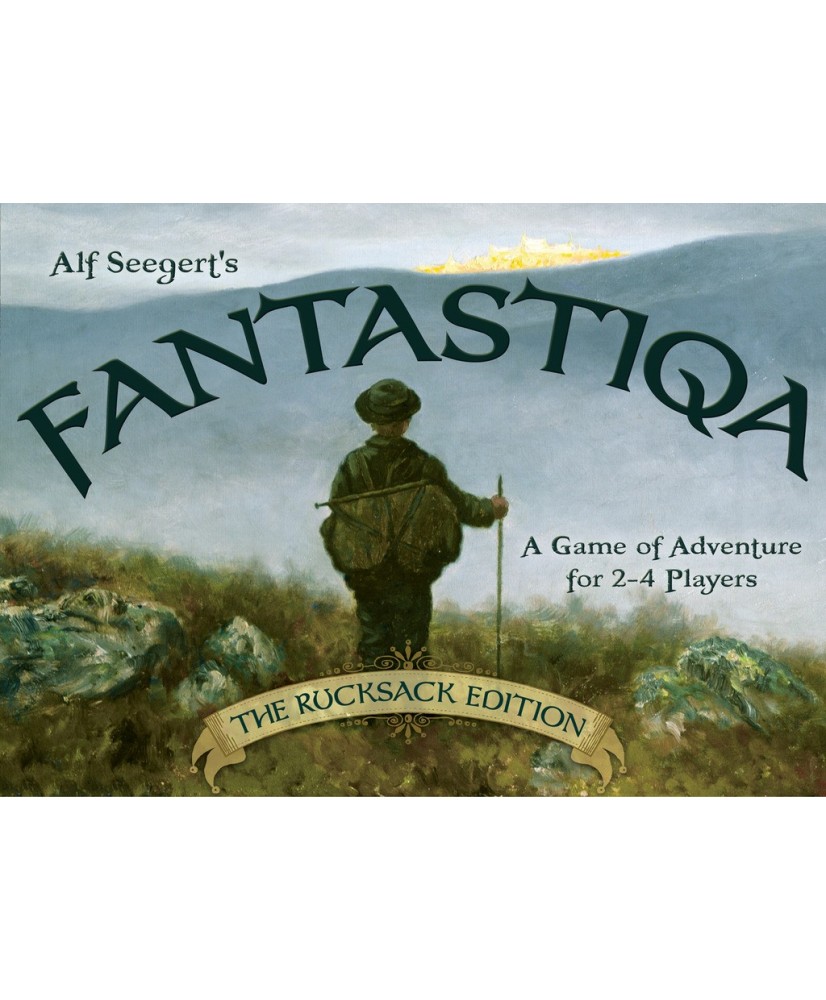 Welcome to the wild, weird world of FANTASTIQA! Fantastiqa is a deck-building board game set in a fantastical landscape of dark forests, mist-shrouded highlands, and frozen wastes. As you and your foes journey around the board, you will subdue strange creatures and fulfill fabulous quests. Each creature you encounter has both an ability and a vulnerability. By playing card symbols to which a creature is vulnerable, you can subdue it and recruit it as an ally. Each creature you defeat is added to your expanding deck of cards, making its special ability into an ability of your own! A defeated Enchantress will wield her beguiling charms to help you overcome wandering Knights. Knights in turn subdue Dragons, adding their fiery breath to your cause. By combining the powers of different creatures you can fulfill curious quests, for example: Send forth your Rabbits of Unusual Size to Nibble Through the Violin Strings of the Violent Vampire Volnar! Deploy a party of web-slinging Spiders to String a Bridge Across the Chasm of Chaos! Send your Dragons and Vampire Bats together on a mission to Ignite the Whisker-Wick'd Candle Guarded by the Ice Cats of Kituviel! Some of the creatures you encounter carry precious gems, which you can spend to purchase powerful artifacts or to summon mythical beasts to your aid. You begin with a handful of household items, but you will grow in power as you adventure and gather allies! By completing quests you score victory points and claim other special rewards. The board changes every time you play, so prepare for a new, exciting adventure each time you enter the world of Fantastiqa! Fantastiqa is easy to learn but challenging to master – a game for families and gamers alike. Additional simplified rules are included for beginners and children. The components are lavishly illustrated with fine art by Caspar David Friedrich, Vincent van Gogh, Claude Monet, Arthur Rackham, John William Waterhouse, John Bauer, Edward Burne-Jones, Francisco Goya, and others. Fantastiqa has two editions: the original "Enchanted Edition" and the compact and economical "Rucksack Edition". The Rucksack edition was released in 2014, and slightly reduces the number and quality of the components to make the game more affordable, with no real changes to gameplay, so both editions provide the same great game. Awards Seal of Excellence from The Dice Tower. Rahdo's Top Ten Fantasy Games (#5) Dice Tower Top 100 Games of All Time (#40 for Eric Summerer) Dice Tower Top 10 Deck Building Games (#9 for Tom Vasel, #2 for Eric Summerer) Dice Tower Top 10 Games with Fantastic Artwork inside the box (#2 for Eric Summerer) Dice Tower Top 10 Kickstarter Games (#2 for Eric Summerer) Dice Tower Top 10 "Next Step" Games (#7 for Eric Summerer) Dice Tower Top 10 Game from Eagle/Gryphon Games (#6 for Eric Summerer) 2013 Origins Awards -- shortlisted for Best Board Game 2012 GeekDad Golden Bots Award (Honorable Mention) at Wired Magazine ("for a truly different spin on deck-building games") 2012 Top 20 Finalist from Rahdo's Best 2-Player Games list 2013 "Beauty of the Year" (runner up) from De Tafel Plakt
Gryphon Games
Jocul de baza